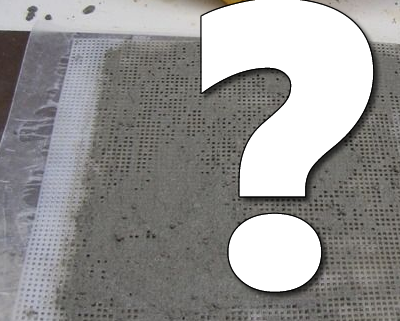 The Mortar Screen allows for your Algae Scrubber to mature in 2 stages: a fast initial stage, followed by a more gradual secondary stage.

The Mortar Screen is #7 Plastic Canvas (knitting canvas) that has been roughed up and then coated with mortar.  The mortar has been allowed to cure (not dry) for 2-3 days, then the screen has been soaked in RODI water for 3-5 days.  The result is a microscopically rough screen that is still flexible.

The mortar is a sacrificial layer that allows algae to start growing in days instead of weeks.  Algae will typically coat 50-75% of the screen within 7-10 days.  During the first few cleanings, the mortar will start to release from the screen (and go in the trash or down the sink, along with the algae harvested).

As the canvas screen is exposed more and more with each subsequent cleaning, these areas of the screen will mature until the whole screen is covered with a more permanent base layer of algae (this usually takes 4-6 weeks).  Eventually, most of the mortar will release from the screen.